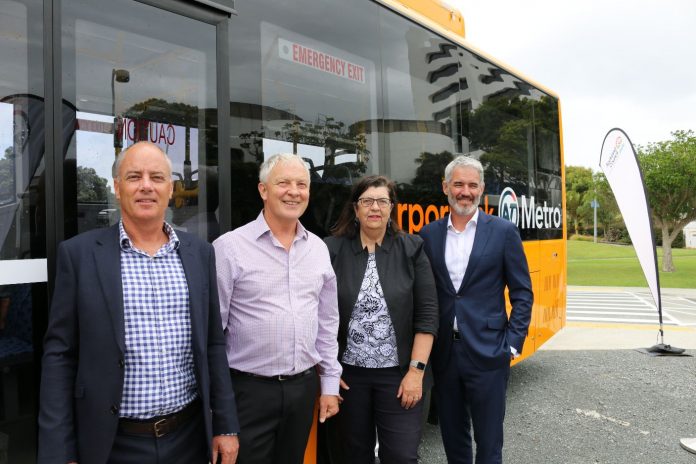 Auckland, 20 January – Today Auckland Transport (AT), together with Auckland Airport and Waka Kotahi, has introduced South Auckland’s first fully electric bus service. This marks the second electric fleet launch for the Auckland region – following the Waiheke electric vehicle launch in 2020.
The new AirportLink service, which will run from Sunday 24 January, will provide key transport connections between Manukau and Auckland Airport, via Papatoetoe. When the Puhinui Station Interchange opens in June, the service will travel along a more direct route along bus priority lanes.
The project is an early improvement from the Southwest Gateway Programme, which will provide safer and more reliable travel choices to move around south and east Auckland.
Operated by Go Bus, the nine buses for the new AirportLink service have been built by Yutong, with supply and support from JW Group.
Auckland Mayor Phil Goff says, “as well as making it faster and more convenient to travel to the Airport and its employment precinct, once the new Puhinui Station Interchange opens in June, the new fully electric AirportLink fleet will help reduce carbon emissions from Auckland’s transport network – contributing towards achieving our climate change goals. “Transport accounts for more than 40 per cent of Auckland’s carbon emissions, so it’s important that we provide emissions-free options as part of our commitment to respond to climate change.”
Otara-Papatoetoe Local Board Chair Lotu Fuli says the fleet is another step towards safer and more reliable travel choices in South and East Auckland. “Working towards a low-emissions public transport network and providing alternatives to private vehicles is an essential part of reducing our impact on global warming and heading off a climate change disaster.”
Chair of AT’s board of directors, Adrienne Young-Cooper, says AT’s recent trials proved that the new electric buses can operate for a full shift on a single charge, while providing an improved customer experience. AT’s commitment to not procuring diesel buses from 2025 is complemented by our Low Emission Bus Roadmap. This commits to transitioning the entire public transport bus fleet from diesel to low emission (electric and hydrogen) by 2040. This new fleet has been designed specifically for those connecting to and from Auckland Airport, so there is dedicated luggage space for travellers. There is also modified priority seating areas, improving customer safety.
Adrian Littlewood, Auckland Airport’s Chief Executive, says the launch of the new electric bus service was an important development alongside the airport’s continuing work on transport projects. These public-transport improvements help strengthen links to our communities and make better journeys for travellers and workers accessing the airport. Connections to the Puhinui rail and bus interchange are an important part of the transport system we’re building for the airport’s future.
A new 38 bus service will operate to connect passengers between Auckland Airport and Onehunga and Mangere Bridge. The 38 and AirportLink will replace the Airporter 380, which will be no longer be in service from January 24, 2020.

The financial vaccine for this pandemic “Mortgage Genius Plan” A smarter way to manage your loan – Introduced by Global Finance for the benefits...